My mum loves going to the cinema. She likes comedies and dramas and she loves the trailers. (And sitting in the dark eating nachos). But she’s never taken me with her even though I would really clearly like to go. (I like to go everywhere with Mum plus I also really really like nachos.) Normally, when she goes she kisses us goodbye and we sit on the sofa peering out of the window waiting for her to come back and tell us all about it. (She tells us everything.)

But a couple of weeks ago Mum said she was taking me to the cinema! Dottie couldn’t go because she’s not fond of the tube, Mum said, and Pippa couldn’t go because she will only do things if all three of us are involved, plus Mum is not sure she would like the tube either, so it was just me, Mum and my human sister, GOING TO THE CINEMA!!!!!

I watched Mum getting ready very very closely just to make sure she hadn’t forgotten she was taking me with her. She did her hair and grabbed her bag and yes, yes, she had my lead in her hand. She was grabbing a handful of poo bags. I was definitely going!

I love going on an adventure, looking at all the people and checking out all the new smells. There are a lot of smells on a trip to the cinema. Firstly, the tube is full of smells. People and food and the smell of being underground. 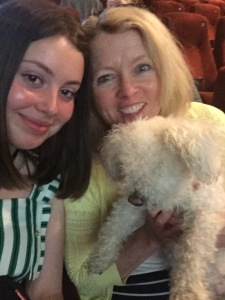 And then when you get out of the tube there are lots more smells. All different, depending where you get off.

We got off the tube at a place called Piccadilly Circus where there were lots more people and cars and traffic lights. It wasn’t my favourite smell – mostly of cars – but it was interesting all the same. The cinema was just round the corner: Picturehouse Central. First, we went to the cafe downstairs. Often I’m not allowed in cafes but this one had lots of dogs inside, all of them sitting with their owners and eating cakes. I had a bit of my mum’s cake and some of my sister’s salmon. (Salmon! Now that is an amazing smell!) I couldn’t stop beaming and saying hello and wagging my tail at everyone.

Then Mum carried me on the escalator up to the cinema. She kept laughing because there were dogs everywhere. All kinds of dogs sitting on cinema seats, waiting for the movie to start. 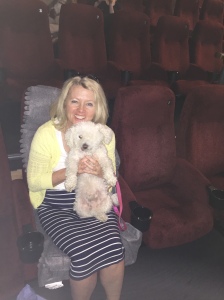 There were no nachos but the man sitting next to us had some popcorn and I got a good smell of it even if I couldn’t help myself like I would have liked. He had a little dog with him too but he was in a bad mood, I think, and didn’t want to help me get the snacks. He growled if I got too close. I didn’t mind because on the other side of us there was a friendly, super fluffy and very beautiful dog who used to live in America. She told me she’d been to the cinema lots but that her Mum hadn’t brought any snacks we could share because last time she’d made a huge mess.

When the movie started I was too excited to sit still, what with the popcorn smell to my left and the lovely fluffy dog to my right, and then the movie started – loud and bright and fast. Much bigger than our TV at home. I sat on Mum’s knee, then on my sister’s, then I wanted to walk around a bit and have a drink of water (there were water bowls on every row) and then I really had to poo so Mum had to take me outside (it was a bit of an emergency). When we came back in the cinema I was ready for a nap so I settled down and watched the film – a cartoon about special powers, I think – and then nodded off. Afterwards, Mum said she didn’t like the movie particularly, but she loved that I was at the cinema too and that she had had the best afternoon. She’s going to find lots more things for me to do. I heard her mention something about afternoon tea! With dog ice-cream! 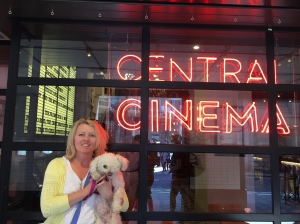